How UK companies are using virtual reality and augmented reality. 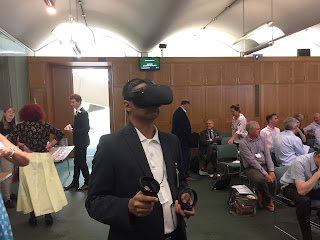 Advances in the tech, the increasing evidence of its benefits, and the growing availability of affordable head-mounted displays (HMD) has led ResearchAndMarkets.com to predict that the market for VR and AR will grow from $7.9 billion in 2018 to $44.7 billion by 2024. These are some examples of the business using VR recently examined by ComputerWorld.


Thomas Cook
Travel Company Thomas Cook produced a range of 360 VR films that holidaymakers at Thomas Cook stores can use to explore potential destinations before booking. "Thomas Cook was the first travel company to deliver in-store virtual reality to customers, we've been nominated for numerous innovation awards, and we've seen a good conversion rate for bookings made after viewing the VR content," Lynne Slowey, head of digital content at Thomas Cook, said in a statement.
ASOS
ASOS has worked with AR firm HoloMe to create a "Virtual Catwalk" that gives shoppers an augmented reality experience of clothes being modelled in their own homes. Users of the online shopping giant's app can point their cameras at a flat surface and click a button to see a 3D model walk along the surface in the clothes of their choice. "By allowing the consumer to bring mobile shopping into their own physical space, we can create a more intimate buying experience," said Janosch Amstutz, CEO at HoloMe. "We are excited to see how our technology can be used as a new way to communicate to the customer."

Newcastle Hospital is using VR to prepare surgeons for difficult procedures. The system uses haptic devices to replicate the use of medical instruments and data analytics to provide objective measures of surgical skills. "We bought their system to train our orthopaedic trainees to be able to do minor procedures in knee surgery," Dr Naeem Soomro, director of robotic surgery at Newcastle Hospital, told Computerworld UK. "What we hope is that once they are able to do that, they can move on to doing operations on cadavers and in real life much more quickly."

Designers and engineers at Jaguar Land Rover have been developing new vehicles in VR environments that allow them to visualise the vehicle in 3D. Staff at the Virtual Reality Centre in the company's Gaydon Design and Engineering Complex use the simulations to view full-size models of individual components or a whole vehicle, which helps the company to optimise the manufacturing and design process.  "With the centre now delivering significant results, Virtual Reality work has helped speed-up the development time of the all-new Jaguar XJ and next year's Range Rover Evoque," wrote Andy Richardson, manager of the Jaguar Land Rover Simulation Group in the UK.

BAE Systems
BAE Systems is integrating AR into the bridges of naval ships to give officers responsible for the ship's safety the ability to work outside of the operations room and still see tactical situation data and other vital information from anywhere on the ship. The project is part of a £20 million investment in AR and VR applications that strengthen the critical systems that give warships their combat capability.  "These technologies have the potential to transform maritime warfare and greatly increase the situational awareness and efficiency of crews on board Royal Navy ships," said Frank Cotton, head of technology for combat systems at BAE Systems. "Our combat systems expertise and investment in future technologies will ensure we continue to deliver innovative capabilities to navies."

Source: https://www.computerworld.com/article/3428117/how-uk-companies-are-using-virtual-reality-and-augmented-reality.html
Posted by Anonymous at 14:22