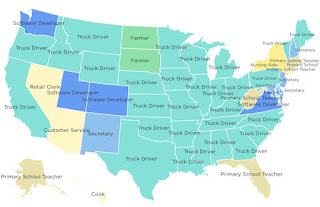 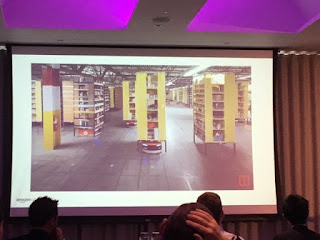 Posted by David Burden at 12:17 No comments:

World Space Day at The Hive 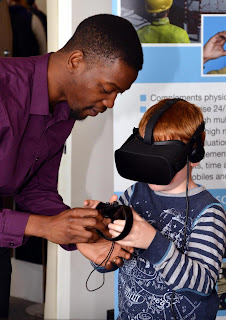 David and Nash took Fieldscapes along to the World Space Day event being held at the Hive in Worcester on the 6th October. This is now the largest free space event in the UK, with over 40 stands covering everything from the Institute of Physics and local Astronomical Societies to Matt Irvin's wonderful TV space and SF models (including the original K9) and bits of Britain's only space rocket - the Blue Arrow.


For the event we created two space experiences - standing on Phobos and seeing Mars, and standing on Io and seeing Jupiter. We chose these as we though the sheer size of each planet hanging above you would give a real "wow" moment, and the two moons have a very different look and feel.


We weren't disappointed in the reaction. As people turned and saw the planets (particularly Mars which fills about 1/3rd - 1/2th of your vision) there were audible gasps. Indeed one young user instantly flinched, looked away and refused to look behind her again! Another young VR-naut kept playing peek-a-boo with his parents and loved the fact that with the headset on he was on his own out in outer-space, but when he lifted the headset off his parents were standing right in front of him. 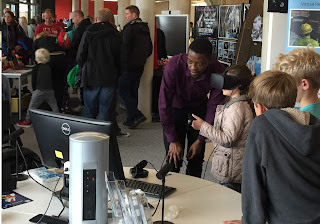 We were in constant demand from opening time til after closing time, and often has a queue of 2 or 3 families waiting. We also had several people come back for multiple goes and to take the time to walk around each moon's surface a bit more.

All in all a great day to educate people about VR and give parents the chance to think about what this might mean for education and training and their jobs.

We'll post the environments up onto Fieldscapes so that anyone can give them a try.

Posted by David Burden at 12:02 No comments: 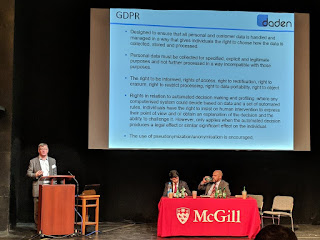 Daden MD David Burden headed off to Montreal last week to present at the British Quebec Business Council's AI Conference at McGill University, Montreal. David spoke both on the current approach to AI Governance in the UK and about Daden's work on virtual tutors, mentors and persona's, and trying to help the audience to understand the different ways that people are using the term "AI" in the first place!

David was also invited to speak to a group of training professionals in Montreal about our work on Trainingscapes and in immersive 3D and VR,  meet with an official at the British Consulate and take in a couple of business meetings, so all in all a busy week!