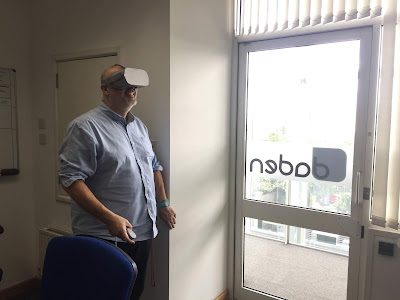 We've had our OculusGo for a few days now and I must admit we're impressed. Whilst the visual quality may not be as good as the tethered versions, there seems to be a bit of chromatic aberration and even a bit of light leakage the overall experience is probably the best yet. The reasons:


The uses of a second phone for configuration works reasonably well but a) you have to reset the whole device to move between users/phones, and b) its not to clear from the phone what is loaded on the headset or playing on it.

The range of experience we've tried so far have been quite limited, point and move 3D spaces with fairly cartoony graphics, 3D video photospheres, so it will be interesting to see what it's like once we get Fieldscapes on it (Nash says "a couple of days") or with some more demanding apps.

One thing that really surprised us though was how much we missed 6 degrees of freedom movement ( aka 6DOF, i.e  the headset responding to lateral moves rather than just pan/tilt/yaw). In the Anne Franke's house where there was only waypoint movement you just naturally leaned forward to peer at what was on the table, and we were so used to that working with the Rift that too lose it seemed really odd. Given that we've only had it in the Rift for a couple of years it's surprising just how used to it we've got. There are a few third-party solutions (e.g. Antilatency - althouhg it does need a special floor as well as a camera, and could cost more than the Go!). Guess we'll just have to wait for Santa Cruz!

We'll post again once we've got Fieldscapes in there.

Posted by David Burden at 09:25 No comments: