Can virtual reality improve your sleep? 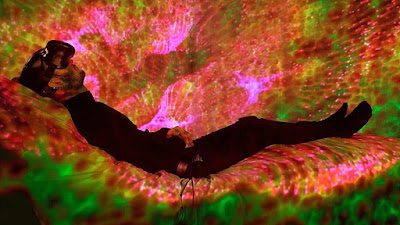 New research reported by Fast Company from the Exertion Games Lab at Royal Melbourne Institute of Technology University has found that there may be a simple solution for some people who have trouble going to sleep: giving them a chance to look at their own brains as they lie in bed.

Scientists invited 12 healthy students into their lab and placed an EEG monitor—or a device that measures electrical brain activity—on their heads. The students laid down and were fitted with a VR headset that contained an artistically interpreted visualization of those brainwaves. The more excited the person’s brain was, the more active the visualization would be, with greater contrast, color, and amplitude.
What researchers found was that after 10 minutes, subjects reported a significant drop in what’s called “pre-sleep cognitive arousal.” That means their minds were quieter and in the state we know leads to good sleep.
While the study didn’t have the subject pool or control groups necessary to be entirely certain that it was the brain visualization, and not just any old visualization, that made the difference, researcher Nathan Semertzidis tells us that findings suggest “the feedback loop” between the sleeper, the visualization, and their brain “is core to the experience.”

As one subject put it in a post-study interview, the visualization was like a tool to relax: “I was drifting off to worries, mainly about work, and [the change in visuals] brought me out of that.”

“The mechanisms which the neurofeedback element of the system operates on is closely aligned with mindfulness meditation,” says Semertzidis, since this system kept people in the moment to avoid rumination and created a sense of calm just as meditation does. “Considering this, it would be possible to achieve similar benefits by performing mindfulness meditation before sleep to move the mind away from focusing on stressors which might otherwise hinder your ability to sleep. However, the downside to this is that mindfulness meditation requires a lot of practice before its benefits can be properly felt.”