A Tale of Two Venues - AI/SF and Wrestling in VR! 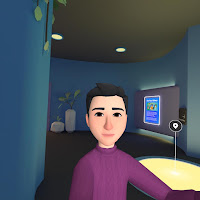 Last night I attended a fascinating discussion on put on Science Fiction, Tech, and Games by GamesBeat/VentureBeat. It touched on loads of topics of interest like AI, Virtual Sentience, Digital Immortality and whether NPCs should have free will (shades of a recent Richard Bartle talk). What matters for this post though is that although the event was streamed on Zoom I attended it in the beta of Oculus Venues in VR.

I went to the Oculus Quest2 launch event in an earlier Beta, and it was OK but very basic, just move your avatar to a row of cinema seats and sit there. So what has changed?

You start with an avatar design session in your own room (not much choice of anything, but just enough to minimise identikit avatars), and then some very basic movement and interaction instruction. There is a very nice menu UI on your inside wrist which opens up to give you access to the main tools. You can navigate either by a local teleport method (move a circle to where you want to go) or free physical/joystick-based movement.

When you leave the room and new space loads and you enter the Venues atrium. 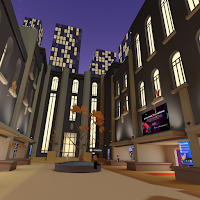 There's space for I think about 8 "suites", 4 down each side. I don't know how shared this is. My venue had the poster outside and declared  38 attendees. 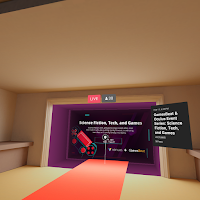 Entering the suite another space loads. I say "suite" as there is a ground level space and a balcony space, both looking out to a big 2D screen where the Zoom relay was - 3 talking head webcams.

Now as an event experience it was pretty poor. The difference between the 3D/avatar us a 2D/video them is big. I know you might pick up less nuances if they were avatars but at least it would feel more like a seminar than a cinema. And if you were on Zoom you could ask questions by chat, but there was no chat facility in VR (and without a Bluetooth keyboard typing questions would be a pain). Also the lack of chat meant that there was no side channel between the attending avatars - amplifying points, sharing links, getting to know each other. If someone tried to talk to you it just got in the way of the presentation - just as in the physical world. I know I keep saying it but c.2010 Second Life events felt far better.

The other big issue were my co-attendees. I know I'm the only person on the ground level who was there from beginning to end. Maybe a handful of others were there for 20mins plus. I'd say peak occupancy was a dozen, more often half that. Most of the people though were there to play and have fun, several were kids (mics on whole time, talking over the presenters etc), and were just having a laugh. Imaging trying to attend a seminar whilst a group of tweens charges through. Luckily at least one group decided to "take the party upstairs" and when I checked in at the end the balcony certainly seemed busier - but that was after the talk finished.

On my way out I decided to check out the other suites. Only one was in use with 24hr Wrestling. Same layout. But a couple of big differences.

First, the video was 360 style, in fact I think it was even stereoscopic, so it really did feel like you were ringside watching the fight. It filled the whole of the space in front of you, and had a real sense of depth.

Second, as there was no commentary as such, it was just the fight, all the avatars chatting, shouting and fooling around with the cameras and confetti was all appropriate for the event - everyone was ringside!

So I hadn't expected that a Wrestling event would beat an SF/Tech/Games event as a good demo of using VR for events - but it did. Just goes you need to think about the complete experience when looking at how to use VR (and immersive 3D) for different kinds of events.