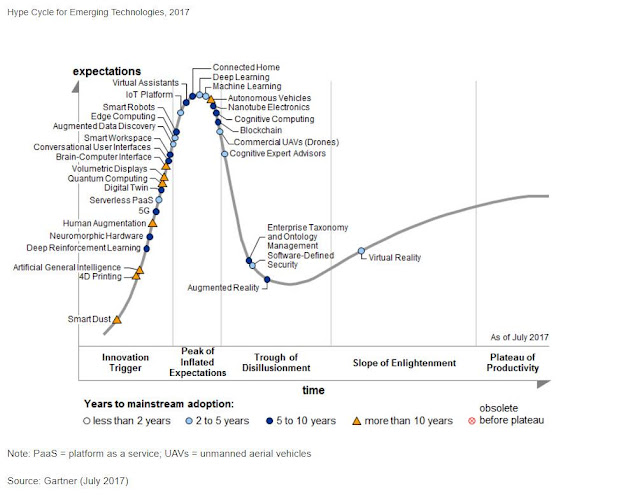 Every year the Gartner Group (well known tech analysts) publish their "hype-cycle" - showing whereabouts emergent technologies are on the journey from first conception to productive tool. We've watched Virtual Worlds ( and then Virtual Reality) work its way along the curve over the last decade, but this year's chart has a number of interesting features which we thought might be worth discussing. We focus here only on the areas of keenest interest to us at Daden, namely AI/chatbots and 3D immersive environments.

First off, it's interesting to see that they have VR now pulling well out of the Trough of Disillusionment, and only 2-5 years to mainstream adoption. This seems reasonable, although a more detailed analysis (which we may do later) would probably put VR in different sectors at different points on the cycle - so whilst this position seems OK for gaming and training I'd be tempted to put it still up on the Peak of Inflated Expectations when it comes to mass media entertainment or personal communications.

As a side-line it's interesting to look at these two Gartner charts from 2012 and 2013. Spot the difference?


Clue - look at the Trough of Disillusionment....


In 2012 Virtual Worlds (Second Life and it's ilk) were at the bottom of the Trough, in 2013 (as the Oculus Rift hype started) they were replaced by Virtual Reality! Virtual Worlds (and SL) are still around - although often rechristened Social Virtual Realities - and we'd guess they are still lingering in the Trough as their potential is still a long way from being realised.

Artificial General Intelligence is far more interesting. It's been mooted for years, decades, and progress is certainly slow. We'll be writing far more about it in coming months but it is a lot closer to what most people call "AI" than the things currently being touted as "AI" (which are typically just machine learning algorithms). As its name suggests its an AI which can apply general intelligence (aka common sense) to a wide variety of problems and situations. Gartner have it about right on the chart as its still a back room focus and hasn't yet hit the mainstream media in order to be hyped - and still seems decades away from achievement.

There are some other technologies of interest on that initial slope too.

It's interesting that Speech Recognition has now gone off the chart as a mainstream technology - whilst it may not be 100% yet its certainly come on in leaps and bounds over the last 4-5 years. But was is in the initial slope is Conversational User Interfaces (aka chatbots) - divorcing what was seen as the technical challenge of speech recognition from the softer but harder challenge of creating a Turing capable chatbot interface. I'd have thought that the Peak for CUI was probably some years ago (indeed Gartner had Natural Language Query Answering near Peak in 2013) and that we've spent the last few years in the trough, but that intention based CUI as we're seeing with Alexa and Messenger are now coming of age, and even free text CUI driven by technology such as Chatscript and even AIML are now beginning to reach Turing capable levels (see our recent research on a covert Turing Test where we achieved a 100% pass rate). So I'd put CUI as beginning to climb the slope up out of the Trough.

By the way, we got excited when we saw "Digital Twin" on the chart, as it's a subject that we have a keen interest and some involvement in. But reading their definition they are talking about Internet of Things "digital twins" - where a piece of physical equipment has a virtual simulation of itself which can be used to predict faults and ease maintenance and fault finding. Our interest is more in digital twins of real people - cyber-twins as they have been called - perhaps we'll see those on later charts!

The final technology of interest is Brain Computer Interfaces. Putting them only just behind Conversational Interfaces reinforces the point that CUI should be a lot farther through the cycle! Useful Brain Interfaces (I'm not talking Neurosky type "brain-wave" headsets here - Gartner may differ!) still seem to be decades away, so sits about right on the chart. In fact it's moved a bit forward since 2013, but still at 10+ years to mainstream - can't argue with that.

So all this is pretty subjective and personal, and despite its flaws the hype cycle is a useful model. As mentioned though the same technology (eg VR) may have different cycles in different industries, and we also feel that each point on the curve is a bit of a fractal - so composed of smaller versions of the cycle as each step forward gets heralded as a great leap, but then falls back as people actually get their hands on it!

We look forward to reviewing the 2018 chart!