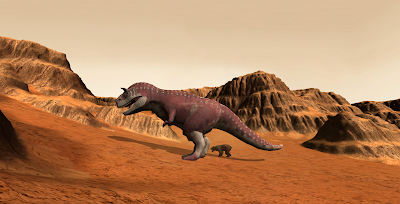 For my DadenU Day I decided to check out some of the VR virtual conferencing environments which are around at the moment (apps seems too limiting, but they lack the agency and persistency to be worlds). I managed to squeeze 4 into the day: EngageVR, VirBela, SomniumSpace and Mozilla Hubs. All comments are based on about an hours play in each, so I may well have missed or misunderstood features. 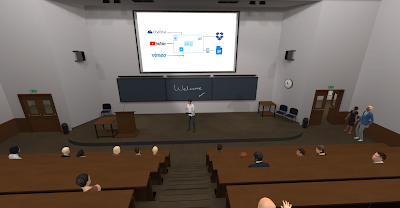 EngageVR (https://engagevr.io/) is the one that seems to be getting the most attention at the moment, and it is pretty slick. Although primarily aimed at VR the 2D/3D interface is fine, and recognises that a lot of people who want to do this sort of virtual conference don't yet (or ever will) have a VR headset.

After a nice avatar designer your dropped into a virtual lecture theatre for a basic tutorial. All "experiences"/environments are accessed through a Oculus style home space and tiled menu. As well as watching a recording (see below) of a panel debate I also wandered around Mars and the Moon (obligatory for VR).

The basics work really well, but the positives that really stood out were:

Overall a very impressive platform, and one which we'd probably have clients consider if there focus is more on 3D/VR events than training. 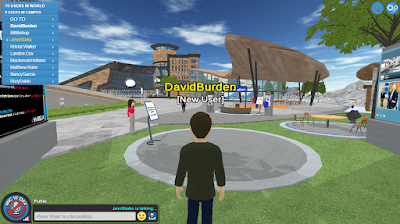 Seen quite a few VirBela (https://www.virbela.com/) events being held recently - Laval Virtual in particular. The whole place has a deliberately cartoony look, and feels a bit like ActiveWorlds did in the late 90s, but with more doll like avatars. Again there's a quick avatar designer and then you arrive at a central plaza (very AW). No tutorial or anything. Information boards tell you a bit about the place and what you can do, and you can TP to example private office suites.

Overall simple but works well, but not sure the look is for most of our clients. 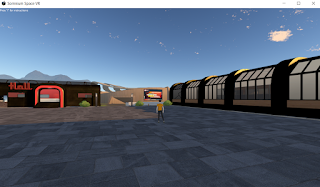 I keep hearing about this one (https://www.somniumspace.com/), and wasn't sure what to expect. Overall it felt a bit like Second Life Alpha c.2004 (actually not that good) or early High Fidelity. It is very aiming at a persistent VW rather than a conference/training space. Huge download, and VR promised for 2020. There is scripting (LUA?) and building a la SL, but it that's what you want why not just to go to SL. They also have an SL like land model, although backed by blockchain. I guess they'd say their differentiation is blockchain (so what) and VR building (when it comes). If SL had VR then I think any need for SS would just disappear. Couldn't really get much to work, and very laggy. Maybe check back in a year.

Again heard a bit about this one (https://hubs.mozilla.com/#/). Feels like Google Lively more than anything else. Very angular and low rez, and a weird perspective so its hard to tell if an object is small and close, or big and far away! Trying to build anything complex would be a pain. You can though just drop in objects from Google Poly or Sketchfab. Probably more of a fun space to get kids to build things in, and people are using it for more serious work, but probably not for most of our clients. Be an interesting challenge to build a very "serious" space in it though.

The avatars are trunk and head only. 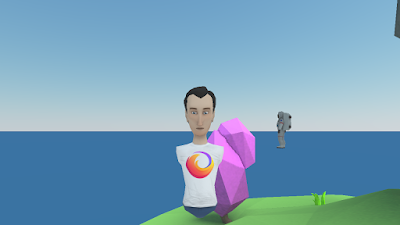 Coming back to Trainingscapes after those 4 actually felt quite liberating. Would love to have EngageVrs recording and avatars, but would probably trade that for the ability to build and create things (which any non-student account can do) and have agency. And for persistence SL still seems streaks ahead. But I can certainly see that EngageVR (and possibly for the right client VirBela) would be a good option for clients after virtual meetings conferences. But then again if they want to do more than sit and listen they're stuck - so not really for collaborative activities, you couldn't do this for instance: 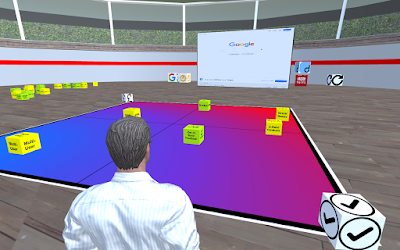 There's also no sign of any of them working on mobile/tablets which Trainingscapes does!

I'll try and test out a few more worlds this week, and then dive back into SL/Open Sim.