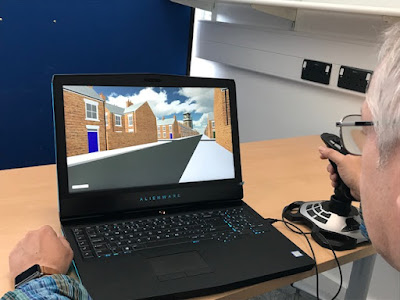 A recent study by the Birmingham Community Healthcare (BCHC) NHS Foundation Trust found that after brain injury over 70% of patients reported a reduction in their ability to navigate and this had a major impact on quality of life.  If you take a moment to think about all of the cognitive skills you draw on just for a simple journey, this can become quite a complex task for someone with difficulties in all of those skills. In an outdoor environment we often rely on tall distinctive landmarks to help us build a ‘bird’s eye’ or overhead map of the environment or we use local landmarks such as post boxes or shop fronts that help us learn a route using more of a ‘worms eye’ view.

Prior research had already shown that people used similar navigation strategies in a VR environment as they did in the real world. So, in order to better understand way finding and route learning in people with acquired brain injury (ABI - e.g. stroke and traumatic brain injury), BCHC asked us to develop a virtual simulation that patients and researchers could use – saving a massive amount of time on outdoor, providing greater control, and reducing risk. We created a network of identical streets lined with typical Victorian terrace housing, and gave researchers the ability to drag and drop distant landmarks (e.g. church spires, tower blocks) and nearby landmarks (e.g. pillar boxes, bus shelters) to create different route finding challenges. The researcher could then mark up the desired route with virtual arrows and let the patient learn the route from the landmarks, and then remove the arrows to see how well they could navigate with only the selected landmarks.

Theresa Powell, Consultant Clinical Psychologist at BCHC reported that they found Daden “very customer centred, checking with us at each stage in the development that it was exactly what we wanted.  None of our very ‘un’ technically phrased questions were ever too much for them and if our build requests went beyond the realms of possibility, they were always able to find an acceptable solution with us.”

The system has generated far more data than BCHC had expected. There are now two Doctoral students, two Masters students and two BSc students who have or are using the software in their research projects. Between them they have so far tested around 20 people with traumatic brain injury (TBI) and 30 to 40 controls for various projects.

And the findings so far? One project looking at the impact of contact sports on route learning showed that female American Football players performed worse on recalling certain types of routes than student controls. Another pilot project showed that people with TBI perform worse than controls when only landmarks in the distance were available and BCHC is continuing to gather more data to see if this is supported. Another new project is even combining the virtual route learning app with a fMRI scanner!