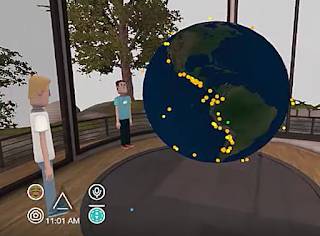 I haven't really been in AltSpaceVR much since we were doing some data visualisation experiments with its wonderful (but now I think discontinued) Enclosures feature - such as this pic of visualising USGS Earthquake data though an AFrame web page into AltSpaceVR). And this was back before the rescue of AltSpaceVR by Microsoft.

So it was fun to spend some time in there this week and see what's going on. The initial driver was an ImmerseUK informal meetup, held on the Burning Man site - some nice builds and all very reminiscent of SL circa 2008. 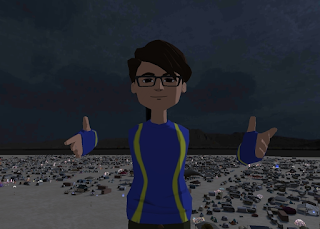 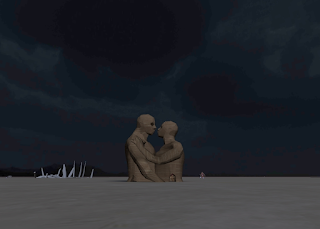 The avatars are less blocky than the originals, but still deliberately cartoony, but better proportioned than the VirBela ones. Things I liked (this was all via Oculus Quest):

Things I was less keen on:
So a pity, if it wasn't for those basic movement issues it would be a pretty good place.
The next question for me of course was can I build there? AltSpaceVR has the concept of Universes and Worlds. The Burning Man thing was a Universe, and then each of the artistic sites you went to from it were Worlds. I think its hierarchical, so one world has to be part of one Universe, and access/permissions is controlled by the Universe owner, but I think can then vary between Worlds.
As a user (think you have to click the Beta Programme and Worlds boxes) you get a default Universe which contains your "home" World where you start each time - so you can customise that which is nice. From the web you can then create new Worlds (and I guess new Universes), choosing a starting template (you cant do this from VR). You then go into VR, and choose the World you want to go into and edit.
Most templates have the same low-poly look as the rest of AltSpaceVR, and most are single room type size- although some are bigger. From the edit menu you can edit the objects in there, change the skybox, and then place new objects. There is quite a good library of objects already (arranged into sets), and you can import individual objects in glTF format. Textures/images can be loaded too - but a lot of this import looks like its via the web interface.
I found most of the templates too claustrophobic so I loaded one which is just a skybox, then rezzed a plane object and made it 50m+, so I started to have a nice place to play with. I then tried placing some objects from the libraries to get a feel for the thing. Manipulation in 3D/VR was OK but not as quick as 2D, and I'd hate to do precision work in there. There's also no scripting at present. Anyway here's a few pics: 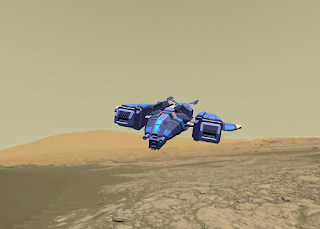 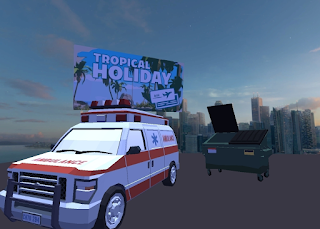 The really interesting thing (for us) is that since AltSpaceVR is built on Unity the object sets are just Unity Asset Bundles, and there is a community built importer for them - as well as for location templates. And of course Trainingscapes also uses Unity, and Unity Asset Bundles for locations and inventories. So it might "just" be possible that we can import Trainingscapes assets into AltSpaceVR. Of course with no scripting there's not much we could do, but if there was some simple scripting and a basic API then possibly we could keep the Trainingscapes "engine" on the web, and play the exercise in AltSpaceVR - just as we used to with SL! Of course even though our builds tend to be relatively low poly they are nowhere near as low as AltSpaceVR - so that may be a blocker or just kill performance, but is might be worth a try.
Otherwise it's good to see how AltSpaceVR has come one, and if they fix that blinker issue I might be tempted to come in and build some meaningful spaces - and I'll certainly look out for some decent events and gatherings to join in world - far closer to an SL experience than VirBela or EngageVR for me ( but then that's more what its designed to be).