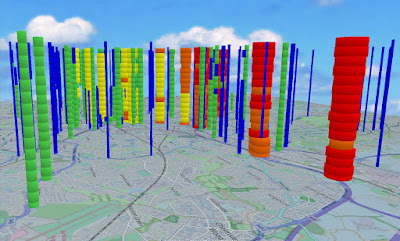 For some time we've been meaning to plot some of the data coming out of Birmingham City Council's excellent open data initiative. So today we finally got around to downloading some datasets from their Open Data Factory - and there certainly seems to be a lot of good and usable data there.

The first dataset we've tried is the annual vehicle traffic counts for about 160 sites across the city. The only real issue was that locations were given a Nation Grid References, so we did a simple linear conversion to Lat/Long based on some known co-ordinates in the city. Since some of the data points represent 4km of road we don't think that any error is significant!

We used a simple geotemporal plot, with a discs for each year's data stacked on top of each other - so each site produces a column of varying width discs - the width/radius being proportional to traffic levels. To aid in immediate visual understanding we also mapped traffic levels to colour in a simple heat map.

Just click the link to fly through in 3D in your browser, or 3D/VR on your smartphone + Google Cardboard.

The most immediate comment from the visualisation is how little the data has changed over 15 years. There is no major sense of traffic levels around the city blooming. Some minor increase in some of the sites - but by no means in all. It's also obvious that the M6 and A34(M) are, hardly surprisingly carrying the biggest traffic loads, and then down through the Bristol Road. The main arterial routes are next.

Using 3D to stack the data does also help to highlight artefacts from data collection - something that Datascape always appears to make easy to find. In this case it's sites like the one below, for instance, where a single sensor is replaced by two sensors in order to get better resolution. 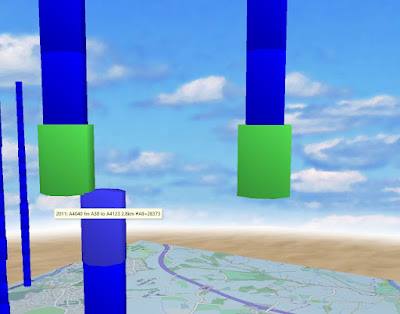 There are also some quite complex changes, such as when the M6 toll opened in 2003, with one sensor being replaced by several, and then some further consolidation. 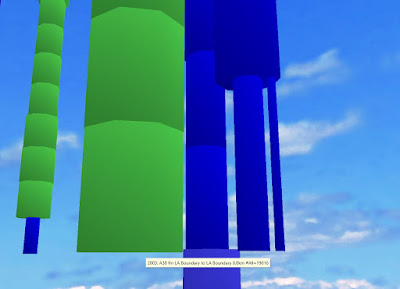 We can also see significant changes in inner city monitoring with several sites being phased out. 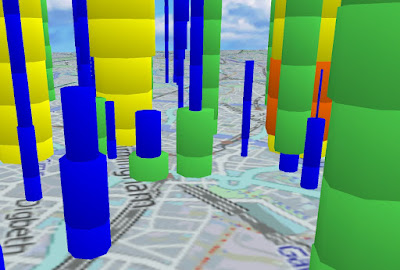 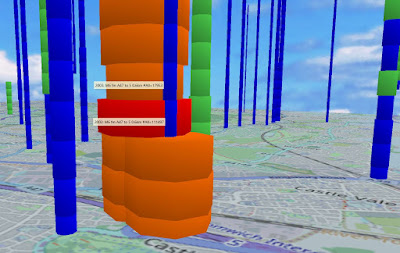 Other M6 sensors don't show a big drop post 2003/M6 Toll so it's unlikely to be that - in fact none of the M6 sensors show any big post-toll change except possibly a minor drop, soon recovered for the ones straight after the junction. Here's just the M6 sites for reference. 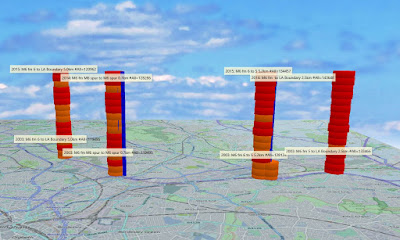