Fieldscapes at the Malvern Festival of Innovation


For the second year in a row we ran a set of workshops at the Malvern Festival of Innovation playing host to a succession of groups of 20-30 students (mostly year 7s) from around Worcestershire and giving them a 1 hour introduction to immersive learning. We set up four stands in order to show the range of experiences and lessons that can be created, and the different ways in which they can be delivered. We had:

Students were split into groups of about 5 and had 10 minutes on each "stand" - so everyone got to try all the kit.

When talking to the teacher we were keen to highlight that:

Fieldscapes itself was rock solid on all the devices all day - despite getting a hammering from the kids. What was particularly impressive was when we had the Apollo experiences in multi-user mode so the kids could play tag on the moon - and even using the public wifi at the venue we had no issues with lag and avatar movement was very smooth. 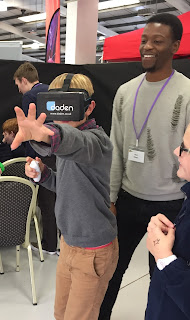 All in all a great day and helped remind us all why we've built Fieldscapes!