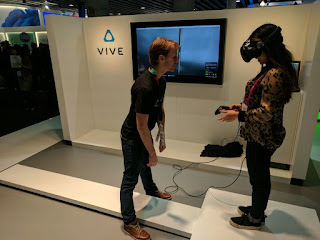 Confronting fears in virtual reality could be the future of therapy after a trial by Oxford academics found nearly 3 out of 4 patients with a serious phobia of heights could overcome it, reports the Independent.

In the study a virtual reality coach guided them around a 10-storey building with a large open atrium in the centre, gradually encouraging them to lean over the edge to rescue a cat or cross a rope bridge. Volunteers who had struggled to approach balconies or take escalators for decades had their irrational concerns banished in a matter of hours, without any input from a human therapist.

“In day-to-day life I’m much less averse to edges, and steps, and heights,” one of the trial’s participants said afterwards. “When I’ve always got anxious about an edge I could feel the adrenaline in my legs that fight/flight thing; that’s not happening as much now…I feel as if I’m making enormous progress, and feel very happy with what I’ve gained.” After his treatment, Dick, a retired paramedic whose severe fear has bothered him his entire life was able to relax looking over a shopping centre balcony, something he said “would have been impossible before”.
Acrophobia, the fear of heights, is the most commonly reported phobia with one in five people saying they have some aversion and 5 per cent of the population being clinically diagnosed.
The study recruited 100 volunteers with a formal diagnosis who had had their fear for around 30 years on average. Half of the volunteers (49) were randomly allocated to the VR group although two were unable to complete the therapy because it was too difficult for them.

In six 30-minute sessions with the headsets over two weeks they began with a VR-coach character asking them to explain what caused their fear: whether they were worried they would fall or throw themselves off the building for example, and explaining basic psychology of the condition.


They then entered the virtual building and at each of the ten floors performed tasks, starting with standing near the edge while a safety barrier moved away or dropping a ball. It then progresses to more challenging problems, such as crossing the expanse on a bridge.
After treatment 34 of the 49 participants (69%) were no longer classed as clinically phobic.
This is the first trial to show the benefits of VR-therapy on its own and the team from the University of Oxford say it could be applied to other mental health conditions and help address a critical shortage of doctors in this area.
“As seen in our clinical trial, virtual reality treatments have the potential to be effective, and faster and more appealing for many patients than traditional face-to-face therapies.” They also have the potential to be much more cost effective. While the initial scheme required months of work from programmers, actors and therapists to fine tune, the equipment is available cheaply and can be replicated widely.
Dr Mark Hayward, of the University of Sussex, said the findings were “very promising” for virtual reality, but added that in more serious mental health disorders like psychosis, these treatments still require a professional therapist’s involvement.