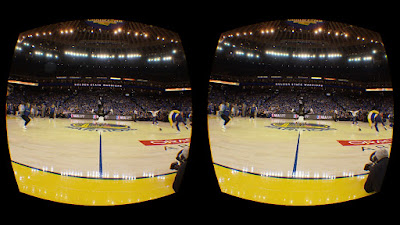 The Guardian reports that scientists from Canada published an intriguing study this month about how virtual reality could improve basketball player’s decision making. The starting basis for the academics at Bishop’s University was that in many sports, teams and players constantly study videos of themselves, their opponents and potential “plays” to learn & improve. However, they wanted to find out if using virtual reality headsets could improve decision making over and above using video analysis on a computer screen because the whole process was more immersive.
To do this the academics took 27 university-level basketball players, split them into three groups: one that used VR headsets in which viewers could see a full 360-degree scene which adjusted in real time; another that watched videos of specific plays; and a third control group.

To start with all players did a number of pre-tests on a real basketball court to assess their decision-making skills. Then they underwent four days of training in the laboratory, with the VR and video group both watching the same 200-play custom videos over four days (80 of which were shown twice, and 40 once) while the control group watched 15 minutes of college basketball.

At the end of the each clip, participants were asked “Where would you move to best help your team succeed in a scoring a basket?” – and then given 10 seconds to decide whether to move left, right, forward or stay put, before being ranked based on their decision.
After four days, all 27 players were tested on a real court with nine other players, who went through a series of plays. At the end of each one participants were asked to move to a location on the court that would best help their team score points, either by receiving a pass or moving to the best position. As in the training sessions, there had the same four choices.
Some of the plays were “trained” – that is, the participants had seen them before either on virtual reality or on video. Others, however, were “untrained” – and had not been seen in the training sessions.
The results were fascinating. Unsurprisingly for the trained plays, virtual reality and video groups “significantly outperformed the control group”, with the VR group attaining 79.5% accuracy, the video group 73.2% and the control group third on 57.5%.
But the biggest imbalance came when scientists looked at untrained plays. Here the virtual reality group “significantly outperformed” those in the video and control groups – with a 78.9% decision accuracy score compared with 60.9% and 60.2%.
So why did the virtual reality group do so much better? The likeliest reason, the researchers believe, is the videos presented in the VR headset looked closer to what would be perceived on a real basketball court and therefore were more immersive. But whatever the reason, they believe: “The superior gains obtained with virtual reality simulation combined with the enhanced accessibility of this technology make it a very appealing strategy to further optimise the development of athletes.” This therefore could lead to new training regimes for athletes using the VR headsets.
Source: https://www.theguardian.com/sport/blog/2019/jul/15/artificial-intelligence-poker-basketball-virtual-reality