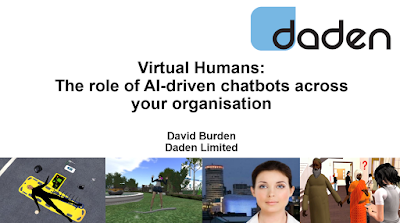 David spoke at the AI & Robotics: The Main Event 2017 conference yesterday. The main emphasis was far more on AI (well machine learning) rather than robotics. David talked delegates through the AI Landscape model before talking about the use of chatbots/virtual characters/AI within the organisation in roles such as teaching, training, simulation, mentoring and knowledge capture and access.

Other highlights from the day included:

There was also a nice 2x2 matrix (below) looking at new/existing jobs and human/machine workers. 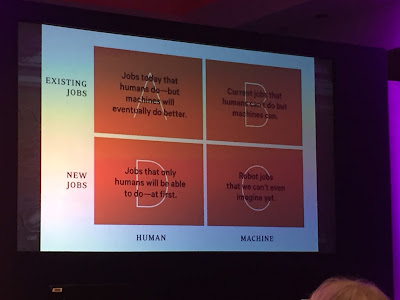 This chimed nicely with a slide by another presenter which showed how as automation comes in workers initially resist, then accept, then as it takes their job over say the job wasn't worth doing and that they've now found a better one - til that starts to be automated. In a coffee chat we were wondering where all the people from the typing pools went when PCs came in. Our guess is that they went (notionally) to call centres - and guess where automation is now striking! Where will they go next?